Posted by Spock at 8:05 AM 3 comments: Links to this post

If you click on this pictor & biggify it you can see that I am drooling. This am bout haff way down our driveway....after only about 2 minutes in the car! I get all way stressed when I hafta go ridin. :)

Here I is after Momma cleened off the drool. See how I won't efun look at her!

No Momma, I was not talkin to you! I won't be doin THAT for a wile!

Bet her don see me now!

Shoot! Hers lookin! Kant xskape yet.

Don open dat door! I'll put the bite on you!

Momma help! Dr. Rolfes got me! He's gonna stab me, I juss no it!

Heer I is back at home. Alive. Barelee.
Momma dint save me. In fakt, her LET him stab me, free times!! FREE TIMES!!! I fought Dr Rolfe wuz a nise guy, I fought Momma wuz nise too. Now I not so sure! Schmaybe I'll forgive them in a few days but for now I is gonna take a nap & forget all about this hole day!
::MOMMA SAYS:: Dr Rolfe & the rest of the staff at Roanoke Animal Hospital ARE nice....despite what Oreo says! If you're near Roanoke & need a vet, you can't go wrong with this one! Tell him Oreo sent you!

UPDATE!!! Momma wants all of you to know...... Listerine has recalled the children's cool blue stuff! You can go HERE to read the story & HERE to get a refund if you have any.

Furst, we want to say fank you for all the kind comments & emails that we has receeved bout Danny. You pee-poles am so sweet. Fanks you for all the thoughts & purrayers most speshully.

K, so wile I was sleepin Momma finally got around to cleanin up mine sidebar! YAY! Please check the links & if yores am not in dere &amp;amp; you want it to be then leef me a comment & we'll add it. If you no of a link to a great site or store that am not dere, let me no bout that too!
Posted by Spock at 9:04 AM 22 comments: Links to this post 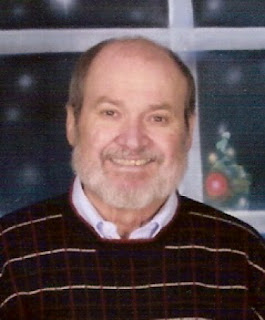 Daniel Franklin Kidd, Jr., 64, of Woodland Road, Valley Ridge, Covington, Va., died Thursday, April 5, 2007, in Carilion Roanoke Memorial Rehabilitation Center in Roanoke, Va., after a courageous battle with cancer. Born August 12, 1942 in Botetourt County, Va., Danny was a son of the late Daniel Franklin Kidd, Sr. and Margaret Nininger Kidd Layne. He served in the United States Navy, honorably discharged, and was an electrician for AET Corporation (Hercules). He was a member of the Clifton Forge Masonic Lodge No. 166 A.F. and A.M., the Kazim Shriners, the Clifton Forge Shrine Club, the Hot Springs Shrine Club, the Covington Veterans of Foreign Wars Post No. 1033, and was a member of the Eagle Rock Baptist Church. He belonged to the Alleghany Country Club and several golf organizations. In addition to his parents, he was preceded in death by his father-in-law, R. S. (Bud) Caldwell. He is survived by his loving wife of over 30 years, Lana Caldwell Kidd, of the residence; a daughter and son-in-law, Kimberly and Justin Halterman, of Roanoke; his mother-in-law, Helen Painter Caldwell, of Clifton Forge, Va.; two sisters, Joanie and Mike Unroe, of Eagle Rock; and Barbara Chesnut, of Clifton Forge; seven step and half sisters and brothers, Peggy Arbogast, and husband, Gino, Stacy Herrell, and husband, Tommy, Judy Prease, Barbara Mosely, Ronnie Layne, and wife, Cathy, and Marty Layne, William Layne & wife Kathie; and numerous relatives and friends, including the determined doctors of Roanoke Oncology, the dedicated health care staff of Roanoke Memorial Rehabilitation on the third floor, the many community churches who have ministered to the family throughout this illness, and the faculties of Mountain View Elementary, Alleghany County, Greenfield Elementary School, Botetourt County, and Salem High School. A funeral service will be conducted Monday, April 9, 2007, at 2 p.m. from the chapel of Nicely Funeral Home in Clifton Forge with the Rev. Louis Dodd and the Rev. Jim Grogan officiating. Interment will follow in Mountain View Cemetery in Clifton Forge. Masonic Graveside Rites will be conducted by Clifton Forge Masonic Lodge No. 166 A.F. and A.M. at the graveside. Graveside Military Rites will be conducted by Clifton Forge VFW Post No. 4299. Pallbearers will be David Ergenbright, Mac Wilkinson, Guy Caldwell, Luther Huffman, Dennis Crowder, Joe Peaco, John Dodd, and Mike Cvizic. The family will receive friends Sunday evening from 6 until 8 p.m. at the funeral home. The family requests memorial tributes take the form of contributions in Danny's name to the American Cancer Society, Alleghany Highlands Division, P.O. Box 11, Clifton Forge, Va. 24422, and if you so desire, please consider lighting a luminary at your local Relay for Life. To send condolences to the family online, please visit www.nicelyfuneralhome.com.
Posted by Spock at 7:41 AM 19 comments: Links to this post

This will only be a brief post, I will do a more detailed one later. Just want to let everyone know, my Uncle Danny passed away last night, due to cancer & it's horrible complications, sometime between 8 & 8:30. I had actually gone to the hospital to see him & left at 8. I wish now I had stayed just a little longer.

Thank you so much to those who have kept him in your prayers & thoughts. It has meant a lot. I would appreciate it if you would now pray for Danny's wife, Lana, his daughter, Kimberly & his son-in-law Justin. They will bear the worst of the sorrow. Again, thank you so very much.
Momma Heather & Family
Posted by Spock at 6:34 AM 31 comments: Links to this post